The territory of North and South Kivu, situated near Lake Kivu had been a bloody war field which caused millions of deaths, put many people in misery and forced many people to abandon their homes for places more secure such as Goma and Bukavu.

Goma (located in northern Kivu) and Bukavu (located in southern Kivu) became shelters for orphans, widows, and girls who became victims of unprecedented violence and for families which were often left without a paternal figure.

These widows and young people who have to take care of their siblings, make a living by transporting heavy goods on their backs or on their heads in order to survive. Horses, donkeys and trucks are very expensive and the streets are impassable; using any means other than feet is impossible. As a result the women have invented themselves this job of transporting heavy loads of banana, cane sugar, charcoal, sand and wood. 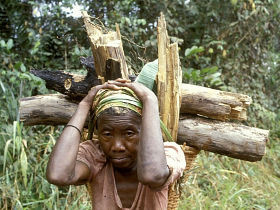 Every woman transports hundreds of kilograms of goods every week. There is no time to a break or to evaluate their health or security. Nonetheless none of them complains about being tired. All of them smile when they earn one or two dollars at the end of the day in order to feed their children. This little amount of money serves to buy a bit of flour or rice.

Apparently, this amount of money does not satisfy their primary needs. It simply is an exploitation of these poor women who do not have any alternatives to this type of activity.

The consequences of this situation present serious dangers to them:

There is no form of assistance other than the little contributions given by some volunteer organizations to bring some relief. The school "Reina de la Paz" built by Sister Brigitte and the initiatives of Mrs. Bibiche in favor of the widows are valuable examples.